The Westford Firefighters Pipes and Drums is a public safety service pipe band made up of Public Safety personnel and civilians alike.  Our mission is to be ever ready to honor a fallen Public Safety or Military hero and to uphold the proud traditions of the Highland Pipes and Drums.  As a performing musical group our goals are to continually improve and foster an appreciation for Celtic music.

The inspiration for forming the Westford Firefighters Pipes and Drums was the sudden and untimely death of long time Westford Firefighter Richard Green on April 9,2008. For his funeral, a collection of pipers including Westford Firefighters Joe DelPapa and William Cashman, Nashua N.H.Firefighter Troy Saunders, Newburyport Firefighter Robert Morse, Quincy Firefighter Bob Mood, and Mass. K9 Search and Rescue Member Joanne Tobey piped Firefighter Green to his final rest. In the aftermath, members of the department decided to take up the challenge of forming a Pipe and Drum band. The founding members decided to choose a green hackle feather on their Glengarries in remembrance of Firefighter Green. The members also choose a Tartan with significant history of the Town of Westford. The band chose the Sinclair red tartan in honor of Sir Henry Sinclair’s Expedition to North America and the band crest, designed by Westford Firefighter Dave Christiana, is based on the Clan Gunn Crest in honor of Sir James Gunn whom, according to the Westford Knight legend, died in Westford on the expedition. The Westford Knight legend and the stone with the carving of a Knight are located about ½ mile from Westford Fire Headquarters.

In the Fall of 2008 the band approached Clan Sinclair seeking approval of their desire to wear the Sinclair tartan. The Clan agreed to the request and the band proudly wears the Sinclair Red. 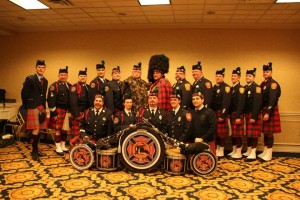 2009 – 2011 saw the band continue to grow and establish itself as a regional band.  Members hailed from departments from Greater Boston, Merrimack Valley, Southern NH and from civilian ranks too.  Our music repertoire continued to grow under the tutelage of various instructors and in 2010 the band competed at the NH Highland Games grade V.  With service as our core mission sadly but with honor we piped many funerals but we also piped a fair amount of graduations from the MA Fire Academy and had the honor of performing at various Fire Dept Balls, retirement and promotional ceremonies.  Many parades were attended as well as other civic events.  It was not all just serious playing.  These early years also set the tone for some very happy St Paddy’s day pub crawls.  These early years also saw the beginnings of two traditions.  Following the Westford Apple Blossom parade in mid May our ever faithful treasurer has hosted a cook out at his home and the highlight for this cookout was the annual “kangaroo court”  where we, with great humor, get to bring charges up against fellow band members who would be handed out various penalties from our esteemed judges, our pipe and drum sgts.  All good fun.  Another summer tradition also started and that was the bands annual 4th of July cookout, hosted for most years at the Tustin household.

2012 was a year of change for the band.  Like many groups we saw members say good bye but we also gained new members in their place.  We also gained a new piping instructor Kirk Brunson who brought new perspective to the band.  We continued to struggle with consistent drumming instruction, an issue that would not get solved until 2014.  Our service to our communities continued with honor with more funerals, civic events, academy graduations and more.  We continued to take in new members and a major change in 2012 was holding practice every week rather than every other as we had been doing.  This greatly improved our abilities as we continued to grow. Our first band fundraiser was held May of 2012 to an Irish theme and would set the tone for more to follow.  The Fall of 2012 also saw the band begin a new working relationship with the Scots Highlander band out of Leominster MA.  We were invited to be their guest band at their annual Robert Burns dinner, an invite we graciously accepted and have played that event since 2013. We continued our quest to compete and in 2013 the band saw one of it’s members take a stab at solo competition.  Pipe Sgt Rick Tustin threw his hat into the competition ring and took part in a 2/4 march competition at the NH Highland games.   2014 was another year of change for the band, we welcomed in a new drum instructor Andrew Adams but we also saw our founding Pipe Major Bill Cashman decided it was time to pass the baton.  Bill stepped down as PM following the 2014 NH Highland games.  Pipe Sgt Rick Tustin assumed the PM duties and in 2015 was officially elected to the post.     One of the highlights in 2015 was a request from the 25th Marine Corp Regiment based out of Fort Devens MA to be their service band for the Change of Command ceremony in July of that year as they welcomed in a new commanding officer. What an honor for the band to perform in this very formal ceremony.  In July 2016 we were once again asked to perform the same duties for the Change of Command of the Sgt Major and the retirement from the Marines after a 30 year career for Sgt Major Tracy Linch.  It was an honor to play for this regiment.

Although the number of band members has stayed relatively the same over the years, the number of events that we have been asked to play in has steadily grown. 2013 we took part in 18 events through the year, 2014 and 2015 25 events, 2016 39 different event and we are on track to match that for 2017.

2017 brought with it a series of changes for the band.  We officially became a 501c3 organization which should be beneficial to those who donate and support us.  To reflect the wide area that our members hail from and to encourage participation from both public safety personnel and civilians alike the band voted to change its working name to Westford & District Pipes and Drums under the corporate name of Westford FF Pipes and Drums, Inc.
As we continued to take in additional new members we also decided to modify our uniform look to make it a bit easier for new members to be street ready.  Although we did not abandon our military style uniform we decided that for parades and concerts, horsehair sporran, spats and diced hose were not always needed.  So we adopted a third variation of our uniform that we dub the parade uniform consisting of green hose, red flashers and day sporran in place of the horsehair, spats and diced hose.

After five years of outstanding piping instruction we bid a sad farewell to our longtime piping instructor Kirk Brunson. Kirk raised the level of ability of all of the pipers in the band. Although we did not become the “competition Squad” that he envisioned we did never the less improve and became an even great band.  With Kirk’s departure we welcomed in Cindy Carrancho as our new piping instructor.

A highlight of 2017 was a concert appearance with the Westford Academy High School Band.  We had approached their music director a couple of years ago with an idea of jointly performing Highland Cathedral.  We were finally able perform at their Winter Concert in December.  Since the Highland Bagpipe chanter and most concert instruments are at two different pitches we reached out to Gibson Bagpipes USA located in Nashua NH to manufacture a few chanters pitched to concert Bflat for us to purchase.  These new chanters proved to be just what we needed to get that blended sound with the High School Band and the performance piece was a hit.   We were so impressed with the Bflat chanters that we decided to stay with Gibson and asked them to outfit us with all new band chanters pitched at today’s higher pitch.  In June of 2018 we took delivery of 20 new chanters and have been extremely pleased with the product. 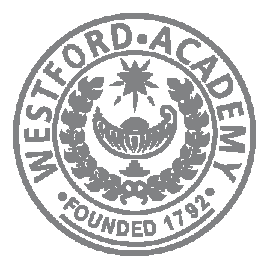 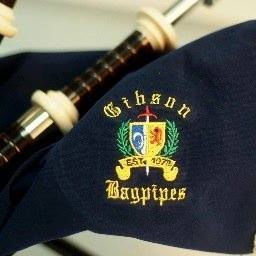 To compliment our business name we finally finished reworking the bands logo to tie everything together.  Our new logo is proudly displayed on all of our social media and will now be available for all of our clothing too. 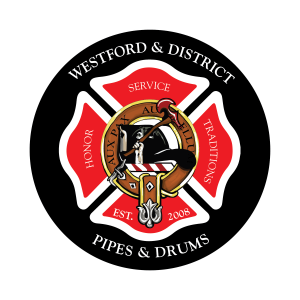 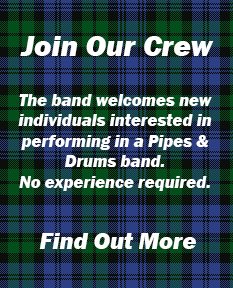 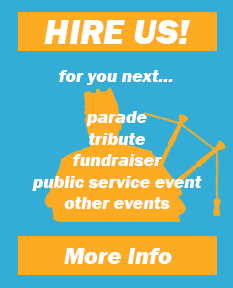 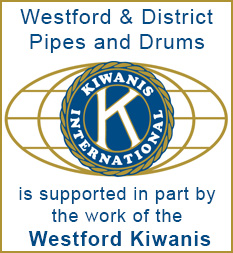 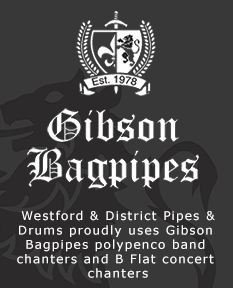 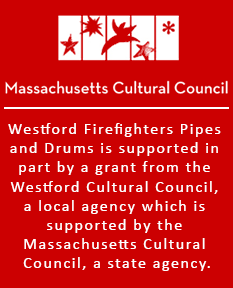